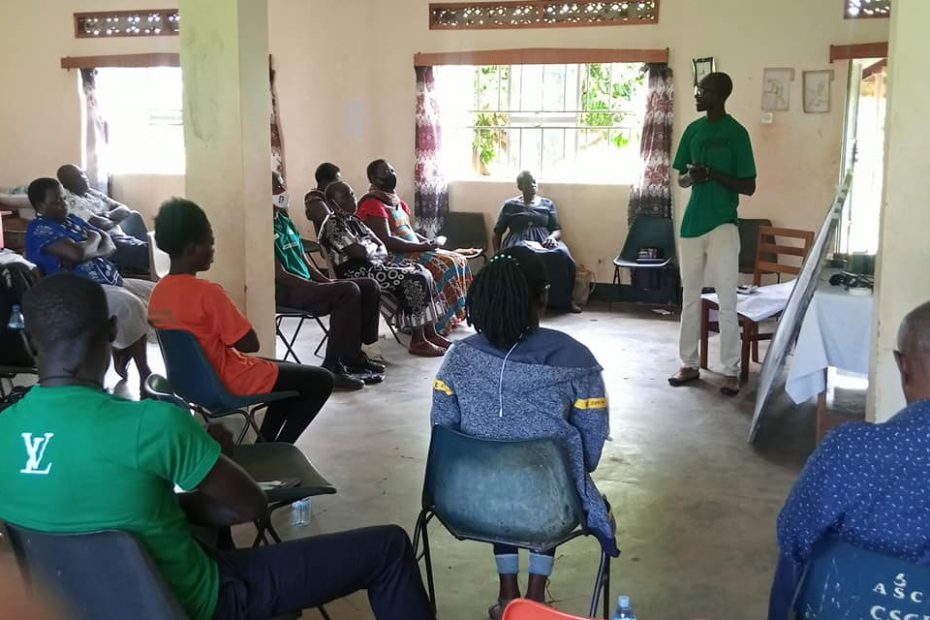 We at CEFARH, together with Bishop Asili’s foundation, organized a 4-day training workshop to create a space for religious, teachers, and other people who are in close contact with children to learn how to deal with children and adults affected by trauma.
The workshop was sponsored by Action for Children Trauma International.

During this workshop participants shared their experiences of PTSD and how they have dealt with their past to help others who are going through a similar experience.
Child trafficking and sexual violence were two of the other topics further developed during the training as they are the most common causes of PSTD in Uganda.

What is post-traumatic stress disorder?

Northern Uganda, like other regions, was the area most torn apart by the LRA war that lasted more than 24 years, leaving many people homeless and without any property.
The worst thing is that many lost their lives, there was sexual violence, human trafficking and all this was in plain sight: relatives, families, and children saw these inhumanities every day.
Many children have been traumatized and are experiencing what is called post-traumatic stress disorder.

Within a short period of time, especially in Northern Uganda, there has been an increase in deaths by suicide due to this situation.

During their lives, people very often go through a highly stressful situation that can leave them feeling anxious and nervous for a long period of time. In most cases, people cope with the moment, move on, and in the worst cases are left with a handful of bad memories and a lesson learned for the future.

But in cases where stress is brought on by a traumatic event, people have difficulty coping with the event. If this happens, PTSD or Post Traumatic Stress Disorder develops.

PTSD is defined as a trauma- and stress-related disorder that may develop after exposure to an event or experience in which death or serious physical harm has occurred or has been threatened.

What are the causes of post-traumatic stress disorders?

As explained above, PTSD is a disorder that is generally caused by witnessing or experiencing trauma or abuse. What one person finds traumatic or stressful may be very different from what someone else considers traumatic. Therefore, there is a wide range of problems, events and situations (some much more severe than others) that can lead an individual to develop PTSD.

Some PTSD causes are:

Post-Traumatic Stress Disorder is a mental disorder that affects the way the brain processes and responds to certain situations. The initial symptoms are mainly mental and emotional and as the severity increases, the symptoms can become physical.

Here are some of the signs and symptoms to look out for:

It is quite possible that symptoms vary between men and women because biologically the two sexes often react differently. PTSD symptoms in men are more likely to be aggressive, irritable, and violent, while a woman’s symptoms may involve more emotional reactions, such as feeling depressed and sad. They may also show more anxiety than men and isolate themselves from the people around them.

Uganda is an East African country located on a central tableland covered mainly by rainforest. It is home to approximately 43 million people. The population is very young, with an average age of 15.9 years.

Its location makes Uganda, among African states, an important destination for tourism and international trade. Due to extreme economic inequality and limited access to employment opportunities, Uganda’s population has become economically vulnerable.

What is human trafficking and why does it happen?

Human trafficking uses “force, fraud or coercion” on people for the purpose of exploiting them for profit. Exploitation typically takes the form of physical labor, acts of service or sexual favors.
Traffickers use various tactics to lure their victims: violent force, manipulation, courtship and promises of well-paid jobs.

According to the 2020 Trafficking in Persons Report, human trafficking in Uganda mainly takes the form of forced physical labor or sexual exploitation. Estimates indicate around 7,000-12,000 children are exploited by traffickers.

The reasons why human trafficking is a huge problem in Uganda are linked to social issues and poor criminal justice. Uganda faces a lack of employment opportunities, quality education and social welfare systems to help the nation’s young population.
The absence of opportunities and inadequate access to resources has left young Ugandans living in rural and underserved areas more vulnerable to exploitation.
Even if young Ugandans migrate to the Gulf States to work as labourers, security agents and construction workers, this form of unskilled labour do not prevent any form of human trafficking.

In addition, the criminal justice system in Uganda is not adequately prepared to handle international crimes of this scale and nature.
Special expertise and the cooperation of the international community are needed to arrest and bring to justice human traffickers and their accomplices.

The fight against human trafficking

Currently, Uganda has not met the minimum requirements to eliminate human trafficking, more efforts are needed to improve the situation.

The measures Uganda needs to take to eliminate human trafficking are several and include: increased scope and intensity of federal investigations into human trafficking; a focus on prosecuting traffickers in the courts; assistance to survivors of human trafficking; allocation of resources to NGOs providing protection services to a vulnerable population.

To successfully fight the threat of human trafficking, the Ugandan government must prioritize both resources for survivors and the relentless prosecution of traffickers.

Most children in Uganda have faced some form of violence – physical, sexual, emotional or domestic. More than 8 million children, 51 percent of the child population, are believed to be vulnerable.

Girls, in particular, are at risk of teenage pregnancy, female genital mutilation/cutting (FGM/C) and early marriage.

Child marriage is still an issue: 49 percent of women aged 20-49 years had got married before the age of 18 while 15 percent of them got married by the age of 15 years. This phenomenon is also closely linked with a high rate of teenage pregnancy (24 percent) – which is among the highest in Africa – thus affecting maternal and under 5 mortality rates.

Female girls mutilation/cutting affects 1.4 percent of the total population in Uganda but, in the 6 districts where this is a common practice  (three in Karamoja and three in Eastern Uganda) it affects about 90 percent of girls.

Apart from FGM/C, physical violence is a major concern in Uganda as it is largely normalized and practiced in the context of disciplining a child.Living in Uganda as a child is not easy at all: after the age of 10 years, adolescent boys and girls are often sent to work or are married off as part of a family’s survival strategy.
Half of 5–17-year-olds are working, a quarter of them in hazardous conditions. Children make up the majority of workers in the informal sector, and in rural areas, 93 percent of children are engaged in agriculture and fishing. There are also more than 30,000 child-headed households, and 40,000 children living in institutions in Uganda.

We are continuously working to fight modern slavery, helping those affected by PTSD and preventing sexual abuse and violence against children.

We constantly meet with community and political leaders to plan training, empower people and support law enforcement to stop traffickers.

The work and the training done with the Bishop Asili Foundation and with Action for children trauma international are part of our commitment to give Uganda a better future.